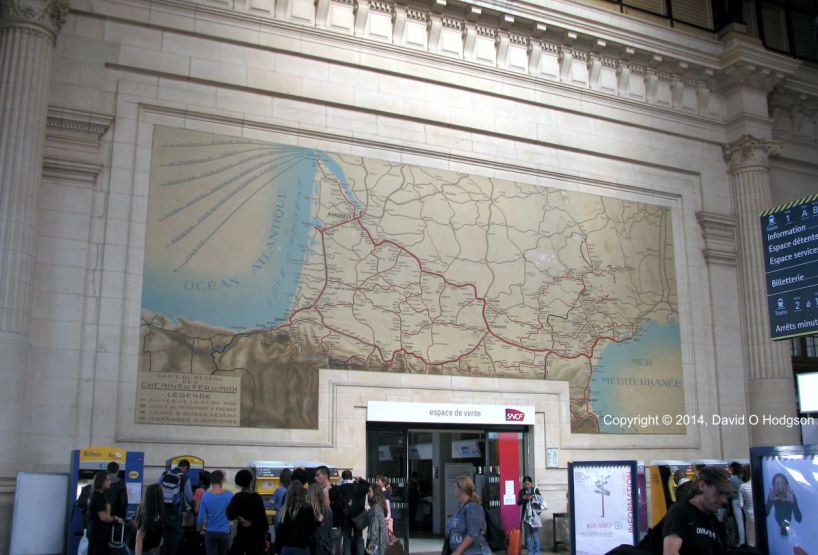 Happy Bastille Day! This year, trying to avoid predictable views of Paris, I decided to post the photo above, which shows a fascinating map that still exists in the Great Hall of the main railway station in Bordeaux (Saint Jean). This huge wall plan was created by the Compagnie des Chemins de fer du Midi, presumably at the time of the station’s construction.

I took the photograph when Mary and I were passing through Bordeaux station in 2014, on our way from Paris to Saint Cyprien. We had just arrived from Paris via TGV, and we were changing trains for the TER service to our final destination.

The photo above doesn’t reveal that that afternoon was extremely hot, and only small parts of Bordeaux Station are air-conditioned (ironically, the area near the McDonalds restaurant)! Mary and I thus spent most of our time there trying to find places to keep cool, but even in those circumstances we didn’t consider the idea of eating at McDonalds.

The photo below shows me in Paris Montparnasse Station, in front of the TGV that had just brought us back from Bordeaux on the return leg of our journey.

In fact, the train route between Paris and Bordeaux has changed since we made our journey, because the LGV Sud Europe Atlantique high-speed line has been opened all the way through (as shown here). When we made our trip in 2014, we could only use the high-speed line from Paris to Tours, and then the train used the existing route to Bordeaux.

The rail map in Bordeaux station immediately reminded me of the tile maps that England’s North Eastern Railway placed at most major stations on its network, the surviving examples of which were a regular sight when I was traveling in Yorkshire as a child.

The photo below shows the map at York Station, and was taken while I was changing trains there a few years ago.

There’s an additional modern notice at the right-hand side of the map, warning potential passengers that they can’t necessarily take a train to all the locations shown on the map!

In fact, there are a few locations on the NER map that you could never get to by rail, because the lines shown were never built. On the whole, though, the maps provide an impressive record of just how extensive the European rail network was at the end of the nineteenth century.