For the Fourth of July this year, Mary and I decided to have dinner on the Napa Valley Wine Train once again. The photo above shows Mary in one of the train’s dining cars, just as it was getting dark and we were preparing to watch the firework display from the train.

The “Wine Train” is a tourist meal excursion that, since 1989, has operated from Napa to St. Helena and back on the tracks of the old Napa Valley Railroad. The line originally ran from Napa Junction to Calistoga, but had been cut back to St. Helena in 1960. In 1987, when the Southern Pacific Railroad decided to abandon the remaining tracks, a local business group stepped up to buy the line and operate it as a tourist railroad.

Generally, the dinner trains run nightly up and down the line, but it’s simply a round trip with dinner, because you usually can’t disembark in St. Helena. Once a year, however, on the Fourth of July, the train makes an extra stop outside the Yountville Veterans’ Home, which provides a public firework show. Passengers can watch the fireworks from the comfort of the train, and it is perhaps a unique way to enjoy the display without the inconveniencies of sitting outdoors at night.

The photo below shows the Yountville Veterans’ Home before dark, taken from the northbound train.

The photo below shows a typical vineyard view from the train. This is the V Sattui Winery. The roses at the end of each row of vines are intended to keep aphids off the grapes. 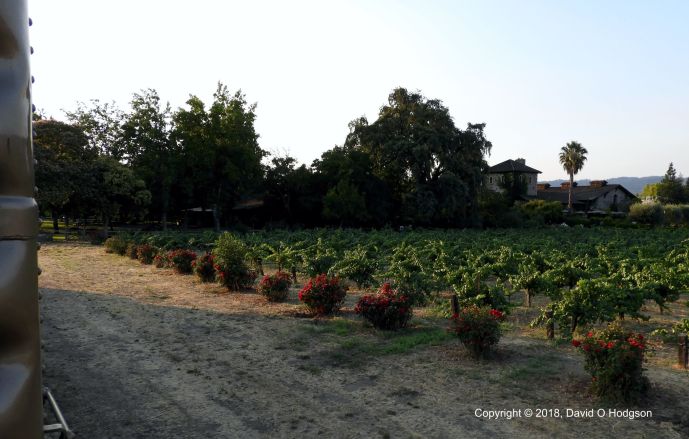 When the train reaches St. Helena, the locomotive must run around for the return journey. This year, for the first time since we’ve been taking trips on the Wine Train, our motive power was not a pair of Alco FPA-4s, but instead GP20 #48, on lease from the Sierra Railroad. Currently, the owners of the Wine Train are refurbishing much of the rolling stock, which has necessitated leasing stock from elsewhere.

Locomotive #48 is shown below as it ran past our carriage.

The photo below, taken at St. Helena during our 2016 visit, shows one of the FPA-4s more traditionally associated with the Wine Train. 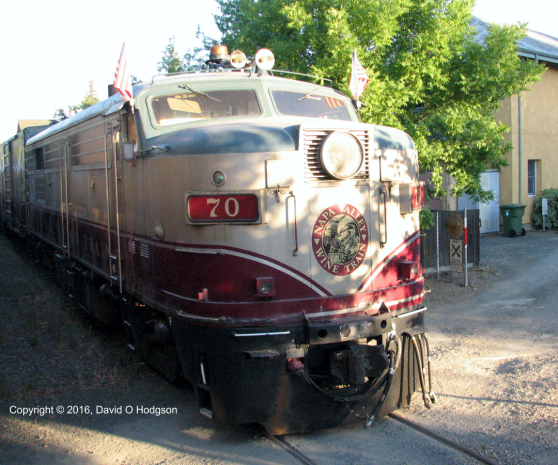 Eventually we arrived back at Yountville after dark, the train halted, and we settled in to enjoy the fireworks. The photo below shows a typical scene, shot from inside the train.

I’d just bought a new Nikon camera, which features a “fireworks mode”, so this was an excellent opportunity to try that out. I was very pleased with the results.

I should add that our dinners on the train were excellent. In “special dining” situations such as this, the quality of food and service sometimes leaves something to be desired. In the early days of the Wine Train (during the 1990s), the food was not always outstanding, but our recent dinners on the trains have been perfect.