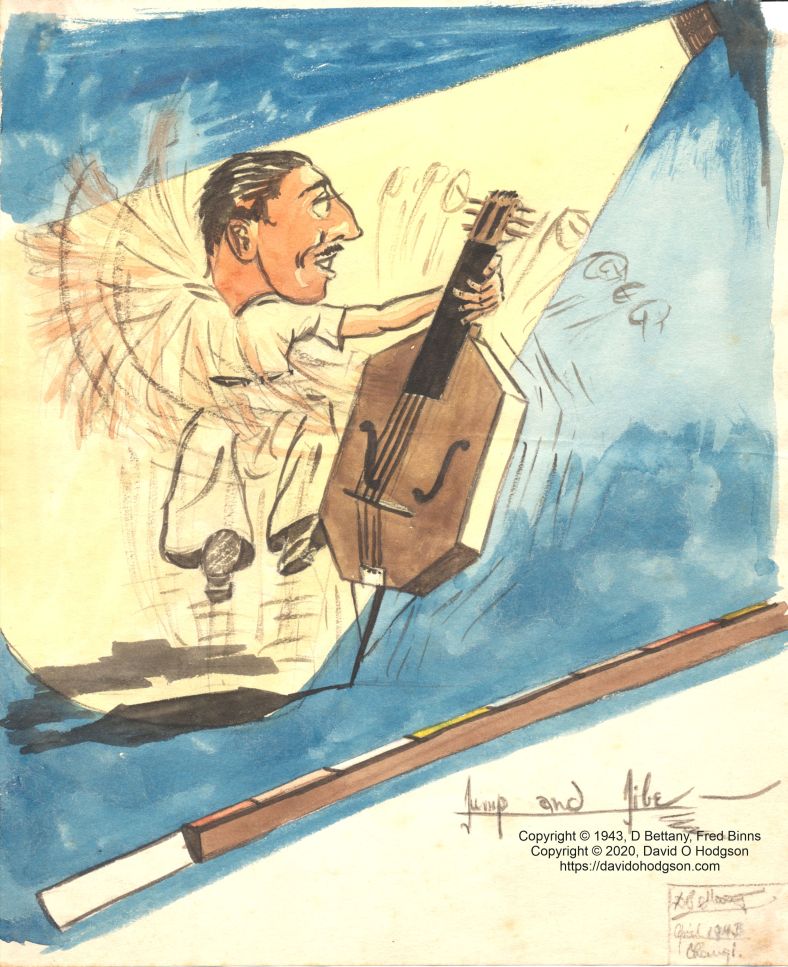 The painting above depicts my mother’s first husband, Fred Binns, as a Japanese Prisoner-Of-War (POW) in Changi Prison, Singapore, in April 1943. It’s quite astonishing that this painting not only survived Fred’s imprisonment and subsequent liberation, but also that it was inherited from Fred by my mother, and then passed down to me from her.

If the painting could speak, it would surely tell a harrowing tale, of how it was perhaps painted using strips of bamboo and human hair, using tints mixed from different soils, then hidden from confiscation by being placed under the corpses of cholera victims. Despite all that horror, it depicts a joyous scene, showing Fred enthusiastically playing the double bass. If the proportions of the bass seem odd, that’s not due to any lack of skill on the part of the artist. That was in fact the appearance of the real instrument, because Fred had built it himself from scrap wood.

Changi Prison seems to have housed an astonishing concentration of creative talent. As shown above, Fred was himself a keen amateur musician, but there were also many artists in the prison.

Sadly, despite having survived all the horrors of imprisonment in Singapore for 4 years, Fred died prematurely of tuberculosis in 1949. He had contracted what was then usually a fatal disease during his internment, but was not aware of it at the time. By the time he died, he had married my mother, and she caught the disease from him. She was admitted to the ominously-named Killingbeck Sanatorium, and it was only thanks to the development of new “wonder drugs” that she survived at all. Her curative treatment was long and unpleasant, involving the complete collapse of each lung in turn, to rid it of the disease. Nonetheless, she survived the hideous disease that had killed her husband, and was able to resume a healthy life, which eventually included marrying my father and giving birth to me!

Perhaps the most famous of Fred’s bunkmates in Changi was the artist Ronald Searle. My mother knew that this painting of Fred was not by Searle, but we were not able to identify the actual artist. There is a signature in the corner, but it was too smudged to be readable.

Recently, while researching for this article, I viewed images of artwork by other Changi prisoners via the internet, and was able to match the style, and the color palette, to a man called Des Bettany. Now that I’ve seen Bettany’s signature, it matches that on the painting, so I have finally established the identity of the artist who painted Fred.

Des Bettany went on to have a successful career as a cartoonist, and eventually migrated to Australia, where he taught art, eventually rising to become Acting Principal at the South Australian School of Art in Adelaide.

The Heyday of St Trinians

Searle is probably most famous for having created the fictitious girls’ school St. Trinian’s. The drawing below is the first-ever published “St. Trinian’s” cartoon, although the caption reveals that the girls shown are pupils of an anonymous opposing school. 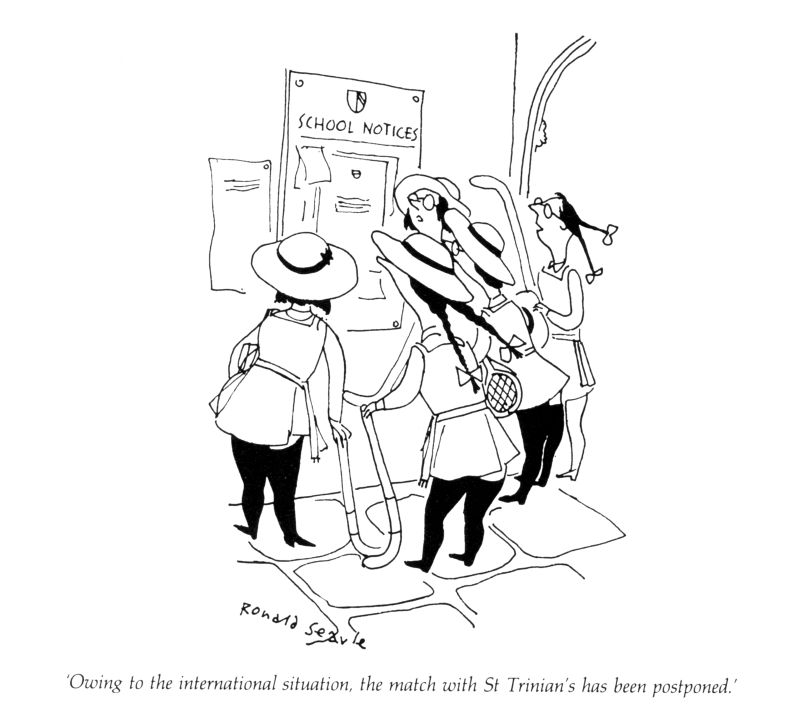 Searle had drawn the cartoon before leaving England, but it wasn’t actually published until late 1941, when Searle saw it in Lilliput magazine while fighting on the streets of Singapore!

Although Searle’s invention of St. Trinian’s predated his wartime experiences, he did use some of those cruel experiences as inspiration for his subsequent cartoons. For example, there is a St. Trinian’s cartoon titled “Bloody Sportsdays…”, which depicts the girls being forced to pull a roller to flatten grass. This was adapted from Searle’s wartime sketch “Light Duties for Sick Men”, which showed prisoners being forced to haul trees for land-clearing, during 1944.

In other schools girls are sent out quite unprepared into a merciless world, but when our girls leave here, it is the merciless world which has to be prepared.

Even in modern times, movies in the St. Trinian’s genre continue to be produced, although it must be said that the themes seem increasingly anachronistic.

The image below shows the publicity poster for the latest St. Trinian’s movie, The Legend of Fritton’s Gold (2009). Incidentally, the actor in the center, who played head girl Annabelle Fritton in the movie, is Talulah Riley, who is in reality the ex-wife of entrepreneur Elon Musk.

[Postscript 8/15/20: What a coincidence. I just discovered that Talulah Riley’s grandfather was also at Changi, as she mentions in this Twitter post: https://twitter.com/TalulahRiley/status/1294569052258664451] 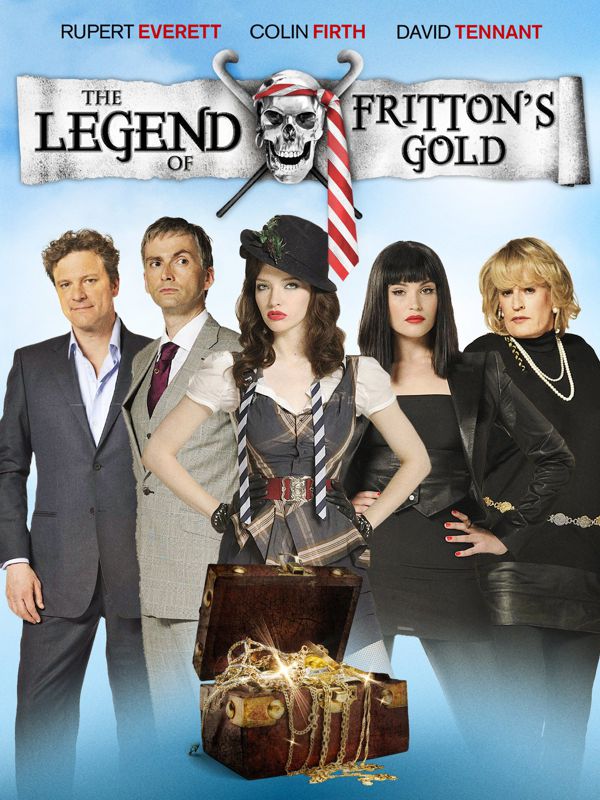 Publicity Poster for the Movie: The Legend of Fritton’s Gold

If you are interested in more details of Ronald Searle’s life, there is an excellent biography by Russell Davies. Further details of Des Bettany’s life can be found here. For details of the life of Fred Binns, however, I’m afraid that it seems you’ll have to rely on me!

I feel truly privileged to have inherited such a unique and wonderful piece of artwork, but also very glad that I never had to endure any of the horrors that led to its creation!

For more details of the POW artists in Changi, see changipowart.com. [Update 11/20/20: Des Bettany’s son, Keith, asked me for permission to post the artwork on the Changi POW web site, and of course I granted that. The page can be viewed at: https://changipowart.com/archives/5882].