The photo above is all that survives of a 1:72 scale model of the Hawker Siddeley Harrier T.2 demonstrator aircraft, which I made in 1976, while still a teenager. In those days, making model kits (usually of aircraft) was regarded as something of a “rite of passage” for young boys. My initial efforts were extremely clumsy, but, by the time I made the model above, I had become quite comfortable with the techniques required. I was able to adapt off-the-shelf kits to my own requirements (as here where I’d converted a single-seat Matchbox Harrier kit to the two-seat version), and even make my own decals.

When I first bought those plastic kits, however, I was too young and unskilled to construct them myself, so my parents helped out by making them for me. In retrospect, their responses to those tasks seem quite odd. I mentioned in a previous post that, like so many other children, I inadvertently learned dysfunctional attitudes from my parents, and this seems to have been another of those cases.

A Fiendish Plot to Infuriate Parents?

In Britain at that time, the two major manufacturers of plastic kits were Airfix and FROG. The strange name of the latter company, which had been the first in the world to make such kits, was actually an acronym, as I’ll explain below.

The first plastic model kit that I remember buying, when I was about 7 years old, was of a Supermarine S6B floatplane, made by FROG. Rather naively, I was planning to build it myself, but it quickly became apparent that I did not have the dexterity

Strangely, my mother agreed that she would build it for me, although she certainly had no interest in aircraft, and I assume that she had never attempted anything like that before.

Things started out quite well, but the struts holding the floats to the plane’s fuselage really were quite tricky to position and fix correctly. Attempts to complete the task threw my mother into a rage, and apparently it was my fault. She shouted at me: “You said this was easy!” I don’t think that I had actually said that, but how would a seven-year-old know anyway?

Thankfully for everyone, that was the last time that my mother ever attempted to construct one of those kits! Thereafter, my father took on the task, until I was old enough to do it myself. Nonetheless, I discovered that he also suffered from a less acute form of the same paranoid attitude towards kit manufacturers, in that he would become annoyed when some aspect of the construction was difficult, and even accuse the manufacturers of having deliberately made it so.

For example, on one occasion he was assembling the Airfix model of the AEC Matador truck (which interested him because he had learned to drive on real RAF Matador trucks during the Second World War). The Airfix kit had the rear body divided into pieces so that it could be built open or closed, but my father was sure this was a deliberate plot to frustrate him! “There’s no need to have so many pieces,” he said in disgust.

Unfortunately, I think that the lesson I learned from my parents’ responses was that the appropriate response to a lack of skill in intricate tasks was frustration and rage! It has taken me a long time to “unlearn” that unhelpful response, and even now I sometimes find myself slipping back into it.

I did eventually improve my model-making skills, bought better tools, and learned the patience to persevere when tasks were intricate or unclear. As a result, I actually spent a lot of time not only building the kits, but improving them, as with the Matchbox Harrier model shown above. Most of the models are now long lost, but I did happen to take a couple of photos that have survived.

The first kit sold by Matchbox, when that company expanded away from its famous line of metal model cars in 1972, was of the RAF Hawker Fury biplane. That was another kit that I built and improved, as shown in the surviving photo below. I made my own decals for Number 1 Squadron, replaced some of the kit’s more overscale parts, and added rigging.

1:72 Model of Hawker Fury, based on Matchbox Kit

Unfortunately, when taking those photos, I didn’t give much thought to the selection of a suitable background, and simply posed the models on our dining room table!

As I mentioned above, the first manufacturer in the world to create plastic model aircraft kits, during the 1930s, had been FROG. The name was an acronym for “Flies Right Off the Ground”, and actually referred to the company’s flying model aircraft. The non-flying plastic models were originally known as “FROG Penguins” because of their flightless state! (The original plastic used was cellulose acetate, rather than polystyrene.)

The image below shows an advertisement for FROG’s models, from the January 1939 issue of Meccano Magazine. It’s interesting to realize that those “non-flying scale models” shown on the right below were not museum pieces, but were all contemporary aircraft, which were in military or civil service at that time. 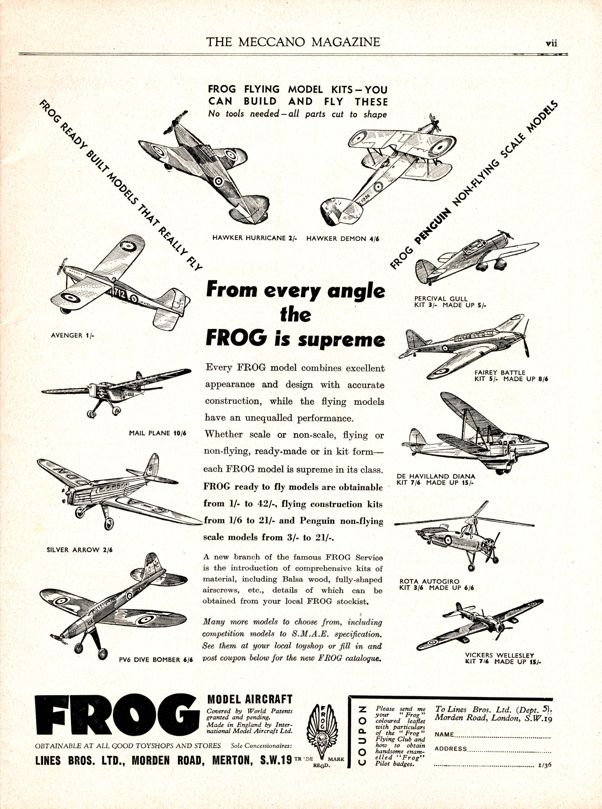 In these days of innumerable TV channels, on-demand internet entertainment, and interactive games, it seems that ever fewer young people have the patience to bother building those model kits. The manufacturers and sellers of the kits have certainly noticed the change, and have tried various ways to win back their traditional buyers.

Another factor contributing to the demise of the plastic kit industry must be the advances that have been made in the detailing of ready-made models. Manufacturers such as Oxford Diecast have come onto the scene, offering fully assembled and painted models of the same subjects. Why take all that time and trouble to create your own model, when you can probably buy something similar (or even better) ready-made?

I suspect that, just as with so many other cultural developments, the days when boys spent hours making plastic models are never likely to return. I wonder whether that will have a negative effect on personal levels of patience and skill, or whether instead those virtues will be redirected to other purposes.

3 thoughts on “Learning the Virtue of Patience”