It seems very strange to have to discuss both raging fires and frosty mornings in the same article, but that’s the way things are at the moment. Not only are we still recovering from the Wine Country fires here during October, but substantial new fires are burning right now in Southern California.

Last week, I was asked to go back the Fountaingrove site of my employer, Keysight, for the first time since the premises were closed due to the Tubbs Fire. The photo above shows how trees burned right up to the south side of Keysight’s Building 4, although the building itself was saved.

Nonetheless, all four main buildings suffered internal smoke damage, due to particles sucked in by the ventilation system from the fires outside. Therefore, we went into our former work site last week, with instructions to sort through everything and triage it as: personal items for removal, company-owned items for cleaning, or trash. Everything that will stay on the site must be cleaned before it can be reused, so eventually we will probably have one of the cleanest workplaces in the county!

The only buildings at Keysight that were completely destroyed by the fire were the two relatively small “Vista” buildings, the remains of which are shown below. Those were always relatively insubstantial structures.

Remains of the Vista Buildings at Keysight

Next to the Parker Hill Road entrance to Keysight is a residential area known as Hidden Valley Estates. As shown below, the fire destroyed almost everything in the northern part of Hidden Valley; the entire neighborhood has been wiped out. This Google Streetview shows the same location before the fire.

There was also a satellite school next to the Keysight entrance on Parker Hill Road, but that burned down.

I say almost everything was destroyed, because, as shown in my photo below, the Jehovah’s Witnesses Hall on Parker Hill Road seems to have escaped completely unscathed. 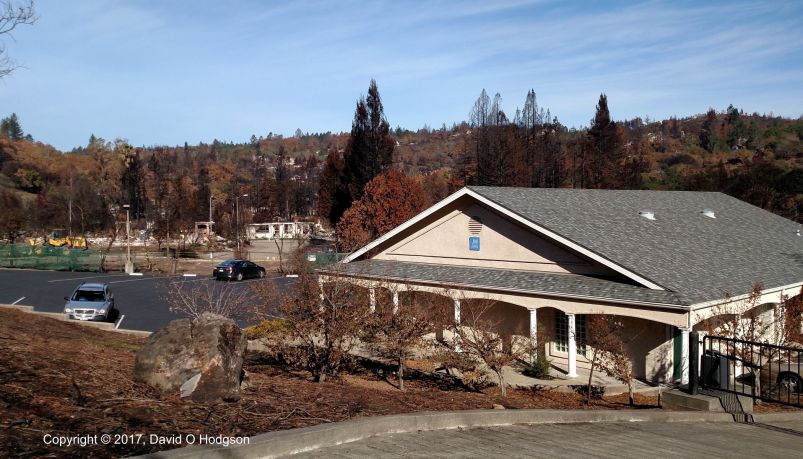 It will be interesting to learn why that particular building survived while everything around it succumbed. Did it have a fireproof roof, or did its isolation in a car park help to protect it?

First Frost of the Season

Moving on to a happier subject, I awoke this morning to the first frost of this Winter season, as shown in my photo of Village Green Park below. As you can see, nearly all the leaves have fallen now, but the church at the far corner of the park has just acquired a new spire, which is actually a covering for a cellphone antenna!

My photo below shows the antenna cover being mounted on the church, in the rain about a month ago. 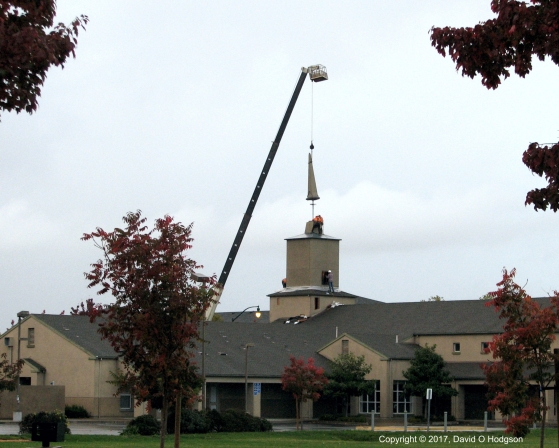 Mounting the Cellphone Antenna on the Church

Our thoughts go out to those in Southern California who are now having to endure what many in our area went through in October. We hope that the new fires will be brought under control very quickly.