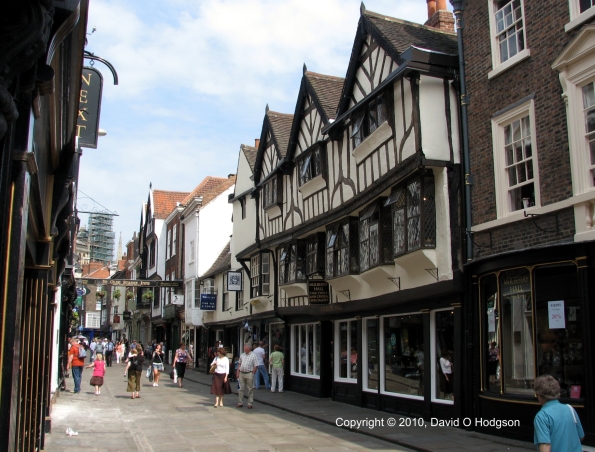 Tomorrow (August 1st) is Yorkshire Day. The photo above shows Mulberry Hall, which is a medieval building on Stonegate in the center of York.

In the background of the photo you can just see part of York Minster, covered in scaffolding at the time of my 2010 visit.

Mulberry Hall was built in 1434, as attested by the date above its front door, although the building has been extended and refurbished several times since then.

For many decades, the building contained a china and glassware shop (which was also called Mulberry Hall). My wife and I always made of point of visiting that shop when we visited York, and we also had gifts sent from there to friends and family in Britain. Sadly, the business closed in 2016, but the building remains, and hopefully will one day again house a prestigious merchant.

I was born in Yorkshire, and, during the period 1979-81, I lived in Scarborough but visited York (by train) nearly every Saturday. I can’t think of any other city where there’s so much to do and see, packed into such a compact space. (There are larger cities with many attractions, but they’re more difficult to walk around.) That’s partly because York is a relatively small city that has fulfilled so many roles for the past 2000 years. The earliest recorded settlement was a Roman fort, which eventually became a town. In medieval times the city became a wool trading center and the northern archbishopric of the Church of England. During the nineteenth century, the coming of railways transformed York into a major rail hub and manufacturing center. While still retaining remnants of all those former roles, the city is now a world-class tourist attraction.

If you’re in the area, York is definitely worth visiting, but you’d probably have to spend many months there to see and do everything that is available!

In my photo above, further down Stonegate, you can see a sign over the street advertising Ye Olde Starre Inne. The Starre Inne is almost as old as Mulberry Hall, dating back to 1644, but what’s interesting about the sign is that includes a corrupted Old English letter. The word “Ye” in this context actually means “the”, and is pronounced “the” (although even many Britons are unaware of that).

As I mentioned in a post on my professional blog, prior to the Norman Invasion in 1066, English used two special letters to represent the language’s “th” sound. One of the letters was called thorn (þ), and that letter was sometimes misinterpreted (and mispronounced) as a “y”. Hence, “þe” is often misspelled as “ye”, as in the sign over Stonegate. I doubt that the Inn’s owners will want to change it, however, because you can imagine the difficulties associated with telling customers that they must type “Þe Olde Starre Inne” in their Google searches!