The Moon and Orion over our House

Last week’s Winter Solstice almost exactly coincided with the Full Moon, so I went outside after dark to see whether I could obtain any worthwhile photographs. One of the photos I came back with is shown above, a remarkable view that includes our house (all lit up!), with the moon partially shown at the top, and the constellation Orion clearly visible in between. It’s all the more remarkable because I didn’t use a tripod; this is just a handheld shot. You can even see wisps of high cloud drifting across the night sky.

I have no pretensions to being a professional photographer (because it’s too competitive; see * below), so I don’t invest in “professional grade” equipment. In the past, my attempts at shots of the moon have been thoroughly disappointing, usually resulting in nothing but a blurry white blob.

My new Nikon B700 camera, however, has a “Moon Mode”. I must admit that I was skeptical about this; many digital cameras have these faddish “modes” that often seem to be useless in real-life situations. However, I had tried the “Fireworks Mode” back in July (as shown in this previous post), with good results, so I thought I’d give “Moon Mode” a try.

* About 30 years ago, I attended a class on “glamour photography” at the Learning Annex in San Francisco. The class tutor, who was himself a professional photographer, explained to us how to succeed in that field. He told us, “I’m often asked my secret of my success, which is very simple; you just need to have a spouse who can support both of you”!

The results of using Moon Mode, as you can see here, were truly amazing. The photo below is a closeup of the almost-full moon taken at the same time as the shot above, showing spectacular detail. It’s not pin-sharp, but bear in mind that this is not taken through a telescope, nor even with a tripod; it’s just a handheld shot with a standard digital camera!

Almost-Full Moon at the Solstice

The actual full moon occurred about 24 hours after the Solstice, but I’m glad I didn’t wait, because, the following night, there was high hazy cloud here, so I could not have taken any usable photos.

Apparently, some Native Americans call the December full moon the “Full Cold Moon”, for obvious reasons. The coincidence of the Winter Solstice with a Full Moon is a relatively rare event, which won’t happen again until 2094, by which time I strongly doubt that I’ll be around to notice it! Thus, this was my last chance to record the event.

I had actually tested Moon Mode earlier on, at Thanksgiving, when we had some interesting views of an almost-full moon through clouds. While experimenting, I took the photo below from our front garden. Amazingly, there is an HDR effect whereby you can still see the moon through the clouds in the distance, and at the same time the lighting on our street. 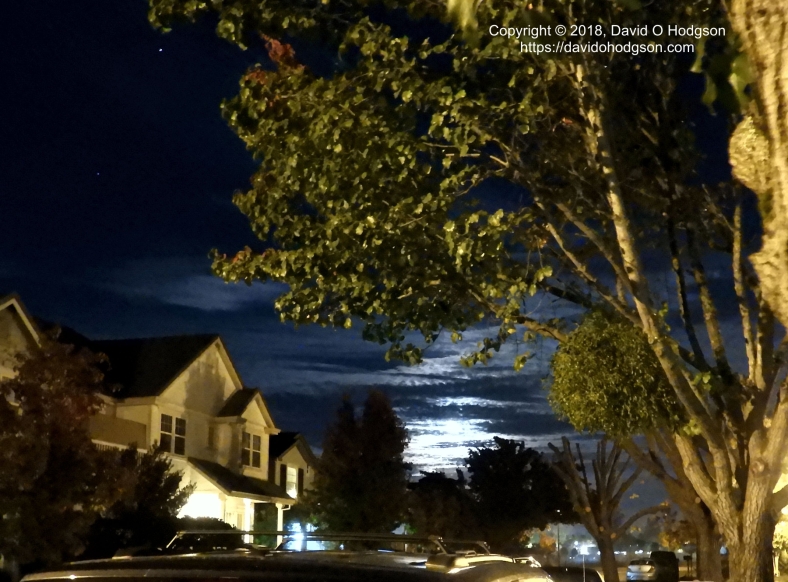 A Cloud-Covered Moon at Thanksgiving

The view above would certainly never have been possible with a film camera, at least without extensive compositing of multiple exposures.

The photo below shows the Thanksgiving almost-full moon, again without the use of a tripod.

I don’t know why the moon looks more orange in this photo than in the more recent example. It’s probably just a color-balance issue in the camera. Nonetheless, the crater shadow detail on the portion of the moon that is experiencing sunrise (top right) is truly astonishing.

The Moon and Orion over our House