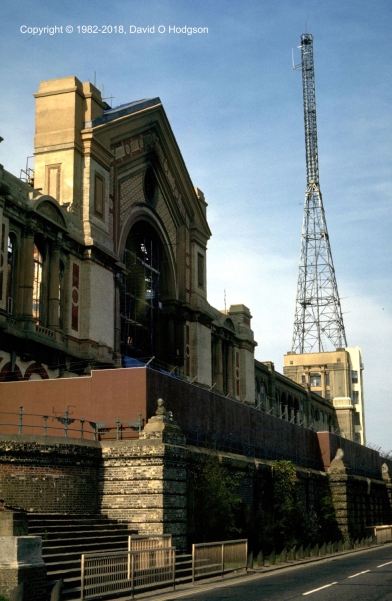 I took the photo above, of the remains of Alexandra Palace (colloquially known as “Ally Pally”), while I was a student in London in 1982. I’d seen the Palace from a distance many times before I actually visited it, but eventually I was prompted to go there, partly by a connection to my intended future career.

This immense building in North London is hardly a major tourist attraction, having had a rather unfortunate history and a wide variety of uses since it was built in 1873 (ostensibly as a counterpoint to South London’s Crystal Palace). Nonetheless, the structure remains usable to some extent, and there are currently plans for a major renovation.

The reason that I’d seen Ally Pally so many times before is because it stands prominently on a hilltop, where it can be seen from the East Coast Main (Railway) Line. When traveling between York and London by train, I frequently caught a glimpse of the structure through the carriage window.

I mentioned that the Palace has had a rather chequered past, having burned down on at least two occasions. In fact, there had been a major fire in 1980, just before the visits during which I took these photos. Despite the partial dereliction of the building itself, the grounds are still worth visiting, because of the spectacular views they offer over much of Central London.

Thanks (presumably) to the building’s prominent position, it was chosen in 1935 by the BBC as the site of their first television transmitter. Studios were inserted into the building immediately below the transmitter tower. When the television service first began in 1936, there were alternate transmissions of Logie Baird’s 240-line system and the Marconi-EMI 405-line “High Definition” system.

At the time of my photograph above, the rooms below the transmitter mast were still in use for the broadcasting of Open University programs. As I’ve mentioned in earlier posts, I was studying Electronic Engineering in London because I wanted to get a job with the BBC (which I eventually did), hence my interest in the history of Ally Pally.

Public Events at the Palace

On another occasion when I visited the Palace in 1982, a public festival was underway, and several historic buses from the London Transport collection were ferrying visitors between the Palace and the nearest railway station.

One notable vehicle that was operating that day was RT 1 (shown above), which was the prototype of the highly-successful AEC RT class of London buses that preceded the famous Routemaster. RT 1 was built in 1939, and was the forerunner of what eventually were 4674 buses of that class, some of which continued in service until 1979. 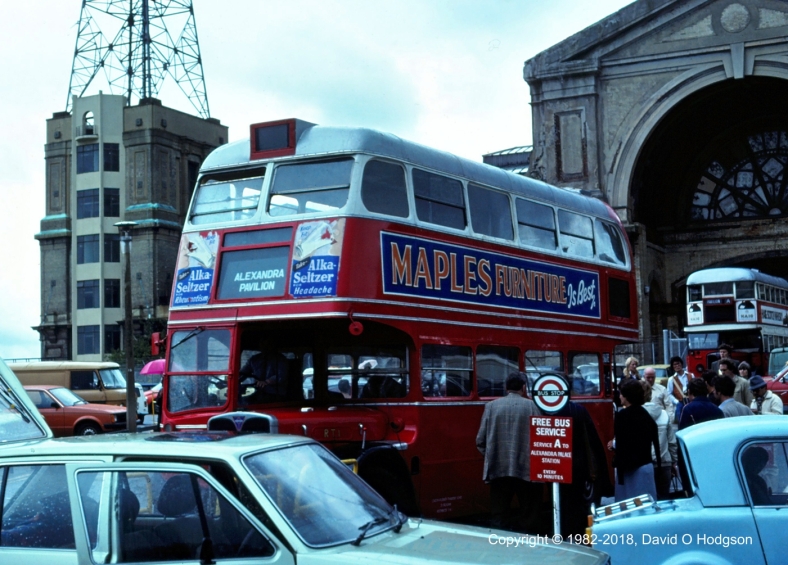 RT 1 is seen again here, hemmed in by cars, and earning its keep by shuttling visitors to the nearest railway station. The TV transmitter and studios are visible in the background.

Rails to the Palace

In earlier days, there had been a much closer railway station. To coincide with the opening of the Palace, a railway branch was built from Highgate to the site, which terminated in a station just north of the palace building. The station building still exists today as a community centre, but should not be confused with the modern Alexandra Palace station on the main line.

The line was built by the Muswell Hill Railway, which was eventually taken over by the Great Northern Railway and finally became part of the London & North Eastern Railway group.

Tubes to the Northern Heights

During the late 1930s, London Transport developed major plans to extend its tube railway services in North London, as the so-called “Northern Heights” extensions  of the Northern Line.

Some portions of these lines were to be entirely new, while others were to be electrified sections of existing steam-operated lines. The Alexandra Palace branch became part of the plan, and work to electrify the line began in 1939.

This excerpt from the published 1937 London Underground diagram shows the planned Northern Line extensions, including the branch from Highgate to Alexandra Palace. The line from Edgware to Elstree was to be entirely new, and I mentioned my visit to the “Arches Field” that formed part of the works for that line in an earlier post.

Unfortunately, the start of World War II intervened, bringing to a halt all work on the extensions.

After the war, development priorities in Greater London had changed, and it was eventually decided not to complete some of the extensions. British Railways, which had taken over the LNER’s lines, continued to operate passenger trains from Finsbury Park to Alexandra Palace until 1954, when the service ceased.

The London Transport station at Highgate has its own unusual history. As shown below, due to the cancellation of the Northern Heights extensions, part of Highgate Station ended up as a “ghost” which is still standing unused today.

Things to Come… But they Never Did. Abandoned Highgate Station, 1982

The surface-level station was rebuilt in Art Deco style at the same time as the new tube station was constructed beneath it. The tube station remains in use today, which accounts for the bizarre survival of the disused platforms above it.

At the time of my visit to the “ghost” station, it was little known, and was extremely overgrown as shown in my picture, but it has now become quite famous as a “Hidden London” site.