This rather dark and blurry photo may look like the interior of some European cathedral, but in fact it’s the foyer of the Natural History Museum in London. I took the photo during my first Christmas in London, while a student there in 1981.

On the right, you can just see the dark outline of part of the huge Diplodocus skeleton (Dippy) that was a permanent fixture in the museum’s foyer in those days. You would be unlikely to see such a thing in any church!

Unlike most students, I didn’t go home to my family during the Christmas break from university, but instead stayed in the student dorms (paying rent, of course), and worked as a Sales Assistant at Selfridges on Oxford Street. (During Christmas of 1982, I worked at Harrods, but I found Selfridges to be the better employer.)

I knew that, if I were to go back to my home town of Scarborough for the Christmas break, my only employment opportunity was likely to be as a waiter at one of the town’s hotels. While still at Scarborough Sixth Form College, and then after returning from my first term at Warwick University, I’d worked as a waiter at the Red Lea Hotel over Christmas, and that was not pleasant work. The pay was very low and the hours were unsociable. Not only that, but, since I didn’t own a car, I had to walk there and back, or wait in the cold for infrequent buses. Working in London, at Selfridges, was considerably pleasanter, and I was able to take the relatively cozy London Underground tube between my lodgings and my work.

At that age, I really enjoyed spending the Christmas holiday in bustling London, where it felt like it was “all happening”. In retrospect, I must admit that I just remember the place as being noisy, dirty, cold, and dangerous, but I didn’t mind all that at the time.

It really was quite dangerous. There was always the threat of an IRA bomb (which did actually happen outside Harrods in December 1983). Apart from that, simply negotiating the traffic could be hazardous, as I discovered one evening when leaving Selfridges. As I was crossing Oxford Street, the heel of one of my shoes broke, causing me to fall backwards. My head landed only about six inches from the wheel of a passing taxi.

I also took the photo below during Christmas 1981, showing traffic crawling along near Piccadilly Circus.

Looking at this photo again now, I can almost hear the noise and smell the diesel fumes!

My reflections in this article should not be mistaken for nostalgia. Although I preferred Christmas in London to Christmas in Scarborough, I don’t miss those days! The Yuletide season for me now, here in California, is much happier than it ever was in Britain. 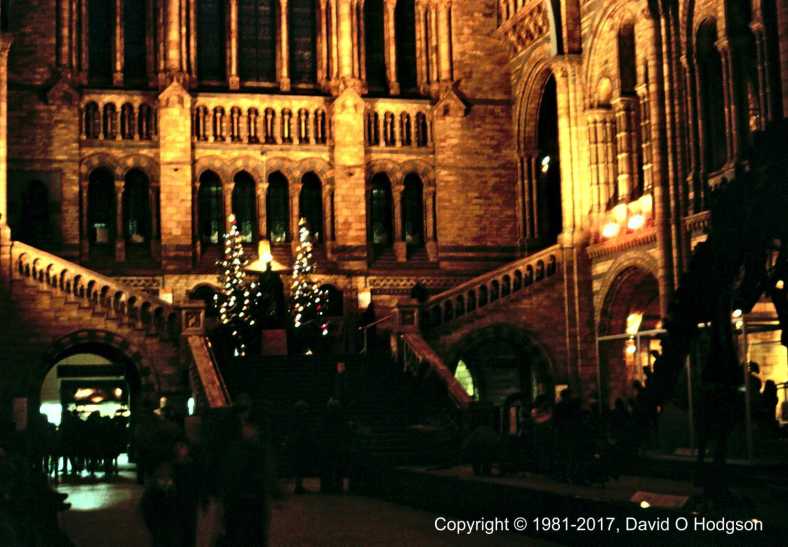