While driving home yesterday afternoon, I noticed what I at first thought was a rainbow in the Western sky, and took the photo above.

However, it couldn’t be a rainbow, because it wasn’t opposite the sun, as shown in the second photo below, where I’d changed position slightly so that the building did not block the sun. When I finally discovered what it was, it gave me a title for this post that sounds like it would make a good name for a Spaghetti Western! 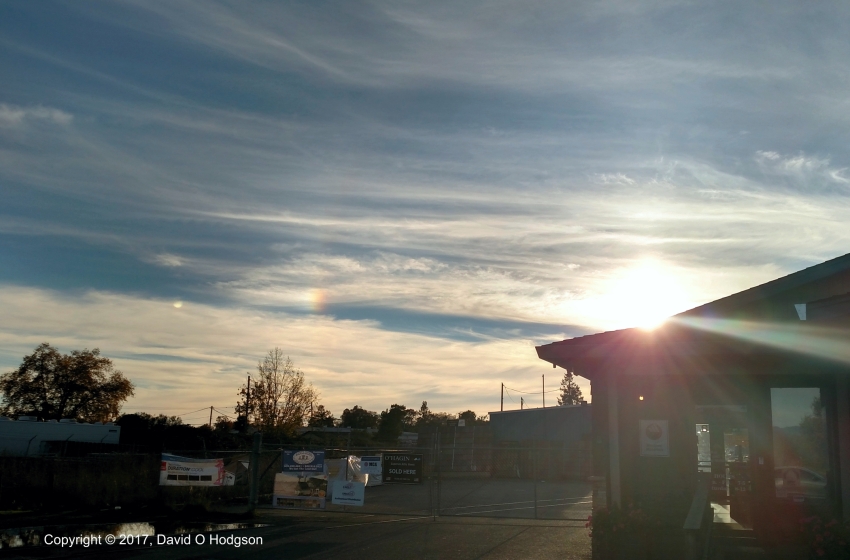 Sun Dog Beside the Sun

It was in fact a Sun Dog, an atmospheric phenomenon that I hadn’t previously noticed here. The scientific name is parhelion, which doesn’t explain a lot since it’s just from the Greek for “beside the sun”.

The location of the photos is just off North Wright Road in Santa Rosa, near a place that used to be called Leddy Junction (before 1947). This was where the North Western Pacific Railroad’s tracks were diverted during the 1930s to connect to what had been the Petaluma & Santa Rosa Railroad’s line. That allowed the trackbed of the duplicate NWP line to be sold to the state, for the construction of what’s now Highway 12.

In my photos, you can just see a pair of rails glinting in the sun. Those are the remains of a spur that once connected to the “main line”, which passed through where the row of bollards now are, on the left in the photos.

This is the current Google Streetview of this location. (I managed to avoid including any portable toilets in my photos!)

Autumn Leaves in the Park

The view below was from our bedroom window, one misty morning during last week. The trees surrounding Village Green Park are now displaying their full autumnal shades, and in fact the leaves have begun to fall.

Misty Autumn Morning in the Park

That may have been my last chance to photograph autumn leaves this year, but we do have the Thanksgiving holiday this coming week, so maybe I’ll stumble across some more somewhere.