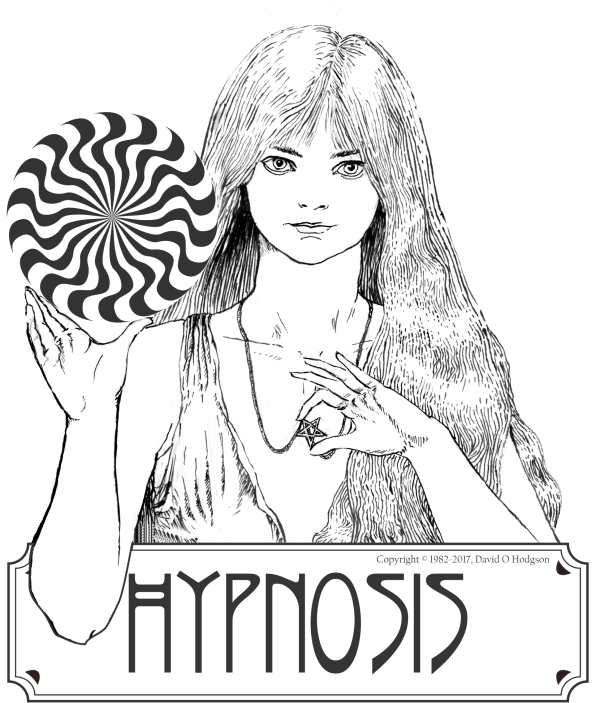 The image above is somewhat adapted from an ink-and-brush poster that I designed for a 1982 lecture on Hypnosis, presented by Imperial College’s H G Wells Society.

Like many artists, I have drawn much inspiration from the work of others. Some have said that no art exists in a cultural vacuum; all art is in some way derived from that of previous works. For this poster, I was strongly inspired by a poster created by the great Czech Art Nouveau illustrator, Alphonse Mucha.

At that time, while trying to generate ideas for the design of the Hypnosis lecture poster, I’d just bought the book Alphonse Mucha: the Graphic Works (cover shown below) from the nearby Victoria & Albert Museum. 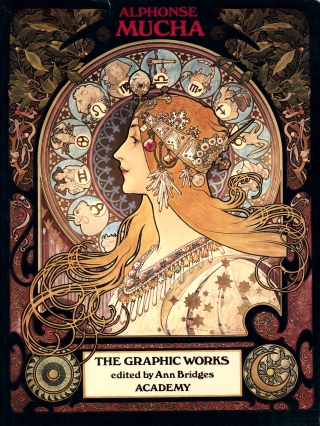 One work that was reproduced in the book, and which particularly appealed to me, was a poster produced by Mucha for a 1921 exhibition of his own work at the Brooklyn Museum in New York.

I borrowed ideas not only from Mucha, but also from other artists; in fact, the line technique that I used for the hair was inspired by the work of the British illustrator, Robin Jacques.

Frankly, my poster design was a bit of a muddle (to put it mildly), because, although it was a striking design that achieved its purpose of attracting attendees to the lecture, I’d completely lost sight of the Art Nouveau style of Mucha’s composition.

For that reason, I decided that I didn’t want to reproduce the original poster here, so the illustration above is an adaptation of my original painting, with some of the most incongruous aspects covered over or redrawn!

My design is monochrome-only, for reasons that I explained in a recent post on my professional blog. The Student Union’s printing equipment was not capable of printing in full color, so, for speed and simplicity, all my poster designs were monochrome.

The lecture on hypnosis that my poster advertised was presented by Martin S Taylor, who soon thereafter went on to become the Editor of the Imperial College Student newspaper, Felix (which traces its ancestry back to the founding of the Science Schools Journal by H G Wells).

I recall Martin’s lecture (and accompanying demonstration) as being utterly fascinating, as indeed were most of the H G Wells Society’s presentations at that time.

Martin’s successor as Felix editor was Pallab Ghosh, whom I’ve already mentioned in a previous post.

Martin was an IC student at the time of the lecture, but apparently he went on to make something of a career of hypnosis, as described on his own web site: http://www.hypnotism.co.uk/