Amid recent reports of many natural disasters around the world, it’s easy to forget one local disaster that occurred in 2014; the South Napa Earthquake. The photo above shows the current state of reconstruction, on the North side of First Street.

I visited Napa again a couple of weeks ago, and was pleased to see that recovery seems to be continuing in the city. Many downtown properties were made unusable by the quake, and have had to be torn down and rebuilt.

The photo below shows another view east down First Street, towards the river. You can see how the brick and tile frontages of some of the previous shops have neatly been incorporated into the new hotel and shop development. 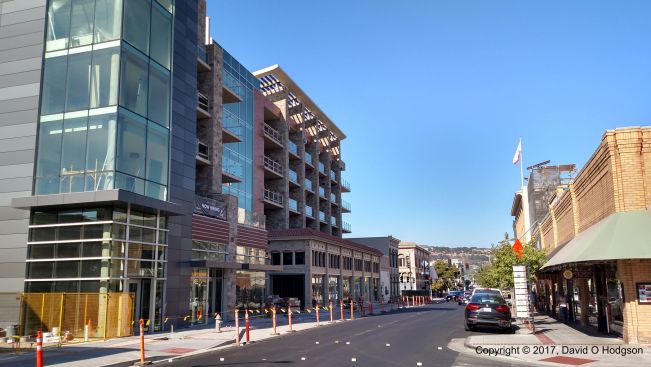 During my previous visit, in January of this year, I photographed the same shop frontages, but before the new Archer Hotel had risen behind them, as shown below. The more modern shop frontages on the left have now been torn down.

On the South side of First Street, the stone-built Goodman Library Building (which housed the local history society) was very badly damaged by the earthquake, but is now being renovated.

The photo below shows the Goodman Building before the earthquake, in Spring 2008.

The following photo shows some of the damage to the building, with the street being protected by scaffolding, in 2015.

Ironically, the redevelopment of the rather dreary 1980s-era shopping center on the North side of First Street was already planned before the earthquake. The rebuilding necessitated by the earthquake encouraged a more ambitious redesign.

Hopefully, when the new development is complete, it will have the intended effect of reinvigorating downtown Napa.