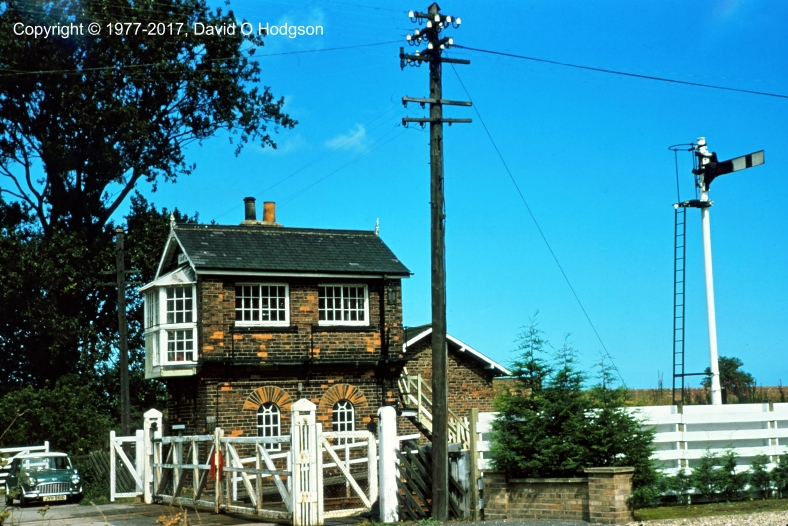 I mentioned in a previous post that during 1977-78, as part of the research for my A-level Art study, I surveyed local road and rail architecture. One site that I visited was that of Ganton Railway Station, on the line from Scarborough to York.

The photo above was taken on 23rd August 1977 (almost exactly 40 years ago), which was obviously a beautiful day. Ganton signal box basks in the sunlit calm, awaiting the next train, with the signalman’s Mini car parked alongside. The signal box was a standard North Eastern Railway Southern Division design of about 1870, but an interesting and unusual feature of it was the large oriel window on the left side. The extra window was provided so that the signalman could have a view up and down the road before closing the crossing gates.

The road that crosses the railway here never saw much traffic, because it leads only to Ganton Golf Course and a few farms. Nonetheless, the crossing was fully guarded and the signal box, which also controlled a block section of the railway line, was manned during operational hours.

Ganton Station had already closed long before my visit, and even at that date the station building itself had been demolished and replaced by a private house (the garden of which is visible on the right in the photo above). The station actually closed to passengers very long ago, in October 1930, along with all the other intermediate stations on the same line.

It was all part of a forward-thinking experiment by the LNER, to streamline operations on the York-Scarborough line by closing all intermediate stations and replacing the stopping services with buses. Much later, during the 1950s and 1960s, such closures and bus replacements became common, but it was quite a new concept in 1930.

All the stations remained open for freight (and occasional excursion trains) until the mid-1960s, when they finally closed completely, and the platforms were demolished.

Even though the railway line remains open, much of the railway architecture along its length has been demolished over the intervening years, leaving an empty and derelict landscape.

I returned to the site of Ganton Station one dull afternoon in 2007, while back in Scarborough temporarily, seeing my family there. As shown above, what is left is ugly and depressing. The hedges around the private house (on the right) have grown up, but the signal box and all other railway buildings are gone. The crossing is now fully automatic, and there is very little evidence that there was ever a station at the site.

The lack of human presence at the site may be welcomed by the local wildlife, however. During my 2007 visit, a couple of wild rabbits were exploring in abandoned rails in the former coal yard by the side of the track, as shown below.

Rabbits at the site of Ganton Coal Yard, 2007