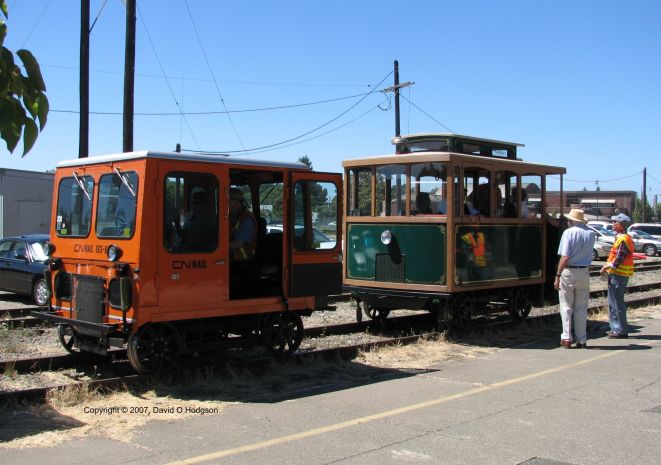 Ten years ago, my wife Mary and I spent an enjoyable afternoon traveling on a short stretch of what at that time was the disused North Western Pacific Railroad line in Santa Rosa. The small “Speeder” in which we rode the rails is the dark green vehicle shown in the photo above.

At that time, a group of enthusiasts used to bring their rail speeders to Santa Rosa annually, to ride the derelict line one day per year. The event took place at Santa Rosa’s North Western Pacific Railroad Depot, which, amazingly, has survived from its construction in 1904 (just before the major earthquake of 1906) to this day, as shown below.

The depot building also featured in the 1943 Alfred Hitchcock movie Shadow of a Doubt, which I described in a previous post.

Although the last regular passenger service on the line ended in 1958, freight service continued after that, and the counties bought the track and right-of-way during the 1990s (via the North Coast Railroad Authority). In contrast to the fate of many railway lines abandoned and lost forever as part of the “Beeching Cuts” in Britain, this fortunate act saved the railroad’s right-of-way for its modern renaissance.

That day in 2007, the Speeder owners were offering free rides to the public, so Mary and I hopped aboard. As shown in the picture above, we chose a green Speeder that had custom bodywork to make it resemble a San Francisco cable car. Given that the Speeders have only 4 wheels, the ride is quite bumpy, but it was a fun experience, and one that we will never get the opportunity to try again, at least on that line.

Below is a short video viewed from the Speeder as we were riding in it:

The good news is that this line is no longer disused, because it now forms part of the SMART line from San Rafael to Santa Rosa Airport. Test trains are already running on the line, and full passenger service is expected to start some time this summer.

The bad news about that is that, because the line is now occupied, we’ll never again be able to ride a Speeder on it as we did ten years ago!