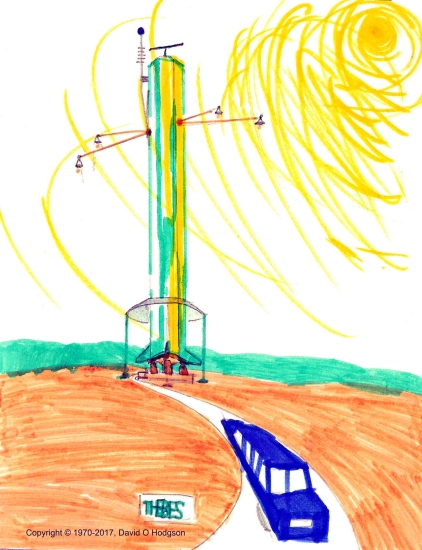 Here’s a “throwback” to a drawing that I produced at the age of ten, to illustrate a story set in “the future”.

Last week, Mary and I went to see the documentary movie Deconstructing Sergeant Pepper, in which Scott Freiman analyzes the musical innovations that went into the creation of the Beatles’ 1967 album*. We both enjoyed the movie, because it doesn’t get bogged down in technical detail, but at the same time doesn’t shy away from technical issues when they’re relevant. The presenter even discussed the Automatic Track Doubling circuit that was used to create echo effects, although he didn’t go so far as to display a circuit diagram!

(* We saw the movie at the Rialto in Sebastopol, but it will be screened again in other theaters around the US, along with other documentaries in the same series.)

Of course, I was just a young boy of six or seven when the Beatles were creating that innovative music, so I didn’t really grasp what was going on in the world around me. In retrospect, I do recall a general mood of optimism and change during those years, but I’m not sure to what extent that was shared by the adults around me, or was simply an aspect of my youth. I’m fairly certain that any such optimistic Zeitgeist was not shared by my parents!

Seeing the “Sergeant Pepper” movie did, however, bring to mind recollections of my own youthful expectations about the future and my role in the world. In 1970, I produced the drawing above to illustrate a story that I was writing at school. My story was ambitiously set in the year 2461, but was inevitably a “product of its time”. The tower I drew was supposed to be a city, but it also happened to be a rocket. The style was clearly inspired by the claims of 1960s-era architects about future buildings, but my innovative design also incorporated the boosters from the first stage of the Saturn V spaceship!

Respected architects of the post-war period, such as Le Corbusier, Walter Gropius, and Ernö Goldfinger claimed that twenty-first century cities would be “managed environments,” probably consisting of huge glass-clad skyscrapers. Many of these architects clearly saw the creation of such cities as being socially beneficial.

Goldfinger himself wrote in 1941:

Cities can become centres of civilisation where men and women can live happy lives. The technical means exist to satisfy human needs. The will to plan must be aroused. There is no obstacle but ignorance and wickedness.

Creativity & the Tyranny of Good Intentions

The fact that I was encouraged to spend time writing such a fantastic story at school seems surprising in retrospect. I do recall that, during my primary schooling, there was significant emphasis on “creativity”, in that we were encouraged or even required to write and draw every day.

If that policy was intended to turn all of us into creative adults, it seems to have been an utter failure in most cases! For me, though, it was generally enjoyable and probably beneficial, and I’m only disappointed that the emphasis of our education changed later to uncreative, rote preparation for exams.

I’ve seen evidence that the emphasis on creativity in schools in those days was actually quite new, and stemmed from the “progressive” educational ideas that had been laid out in the Plowden Report, but the schools I attended were not notably progressive. The Church of England school that I was being forced to attend when I produced the story containing this illustration prided itself on being anything but progressive!

The book “Progressively Worse” by Robert Peal contains an interesting discussion of the history and consequences of progressive education in Britain.