The photo above shows last Sunday’s Super Blood Wolf Moon, as unexpectedly seen from our house. I realize that, by now, everyone is probably sick of hearing about that event, but the fact that I was able to photograph it at all came as something of a surprise. The US media certainly loved the name, which sounds like the title of a really bad horror film!

In an attempt to provide a little variety, I chose this photo as my header, because it depicts the latter phase of the eclipse, when Earth’s shadow was in the process of moving off the face of the moon. You can also see some thin high cloud drifting around, which provides an interesting effect.

We had heavy rain here for most of Sunday, so we really didn’t anticipate being able to see the eclipse at all. However, just as the moon was beginning to darken, the sky cleared temporarily, so I rushed out with my camera to capture whatever I could.

Unfortunately, although the “Moon Mode” on the camera works well for handheld shots when the moon is at full brightness, the dimmed moon really requires the camera to be on a tripod, which I didn’t have available, hence the jitteriness of some of these shots.

The photo below shows a zoomed-out view of the moon from in front of our house. In addition to the orange moon itself, you may just be able to make out the stars Castor and Pollux (in the constellation Gemini), above and to the left of the moon.

Blood Moon with Castor and Pollux

Here’s an enlarged version of the center of that photograph, which hopefully will make the stars easier to spot.

Detail of the Moon and Stars

The photo below shows a closer view of the eclipsed moon itself, although rather unsteady because of the lack of a tripod. 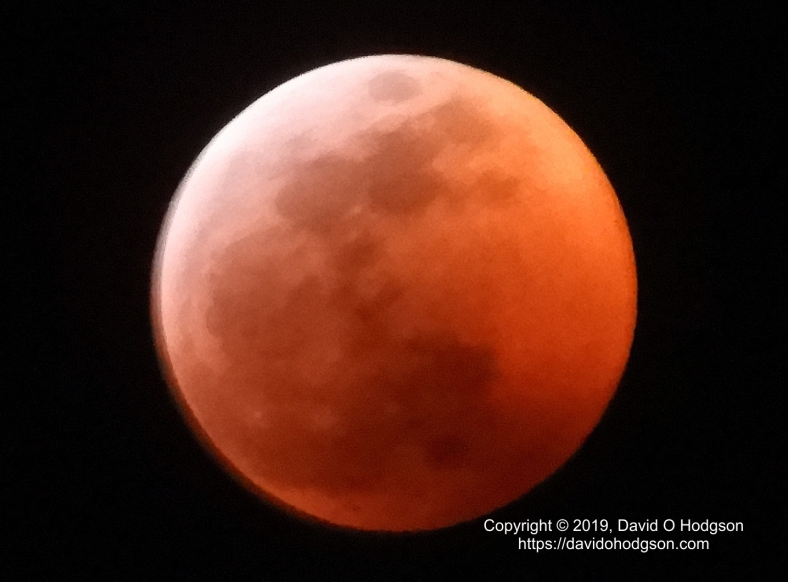 While it’s true that I saw just the same event that millions of others saw that night, I really wasn’t expecting to see anything, so the opportunity came as a pleasant surprise.

The next similar event won’t occur until May 2021, so of course it won’t be a “Wolf Moon” on that occasion.