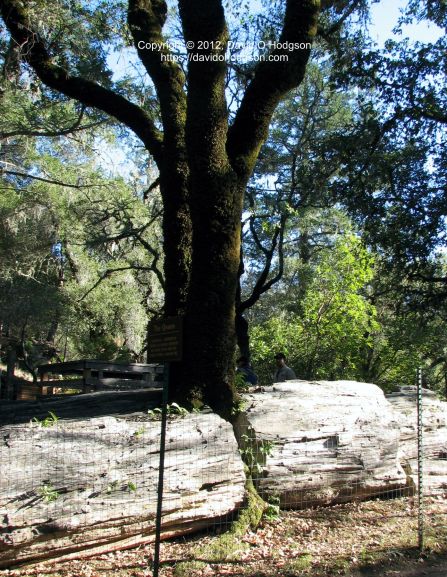 “The Queen”: a Live Oak growing through Fossilized Redwood at the Petrified Forest

The photo above, which I took during a visit to California’s Petrified Forest, shows the interesting juxtaposition of a live tree growing through the trunk of a fossilized tree.

I mentioned in an earlier post that, before I ever visited California, my ideas of the state had been seriously distorted by representations in British media. As a result, I thought that the Napa Valley must surely be a desert with rows of vines growing arbitrarily in it! Similarly, my view of a “petrified forest” was that it must be a group of blasted trunks standing in an arid landscape.

As you can see in these pictures, the California petrified forest, which is situated in the mountains between Santa Rosa and Calistoga, bears no resemblance to my naïve expectation. On the contrary, the petrified trees are in the middle of a living forest.

The land in which the forest is situated is privately-owned, but can be visited at specified times, and on purchase of tickets. Full details of the forest’s history can be found here, at the owners’ official web site. The fossils were created by what must have been a devastating volcanic eruption of Mount Saint Helena, about 3.4 million years ago. The remains of Mount Saint Helena are still plainly visible from the forest’s location, as shown below.

Many of the trees caught in the eruption were species of redwood, which is historically interesting because redwoods are not now to be found so far inland. It’s unclear whether the change was due to altered climate, or to a change in the actual position of the California coastline. The photo below shows a closeup of a living oak tree, growing through the fossilized trunk of a redwood known as “The Queen”.

“The Queen”: trunk of Fossilized Redwood

Many other species of tree have been discovered in fossilized form among the redwoods, including one pine tree, oaks, alders, spruces, firs, and so on. The photo below shows living manzanita bushes (with red bark) growing among the moss-covered stumps of fossilized trees.

Manzanitas growing next to Fossilized Stumps

Following the volcanic eruption, the entire area must have been barren, but most of it is now covered with modern vegetation. However, some of the ash deposited during the eruption is still uncovered today, and little grows in it. Part of one of these “ash fields” is visible below. 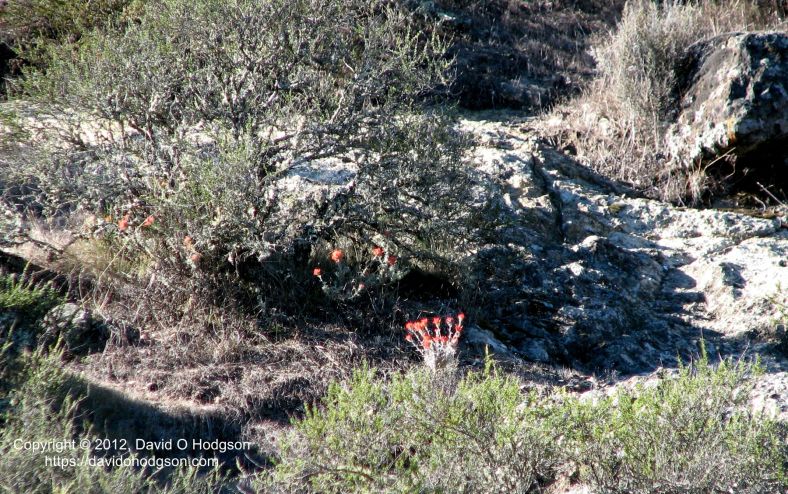 Part of the remaining Ash Field

The fossilized forest was discovered in 1870, and its fame soon spread. In 1880, the author Robert Louis Stevenson spent his honeymoon nearby (writing about it in his book The Silverado Squatters), and one of the fossilized redwoods is now named for him, as below. 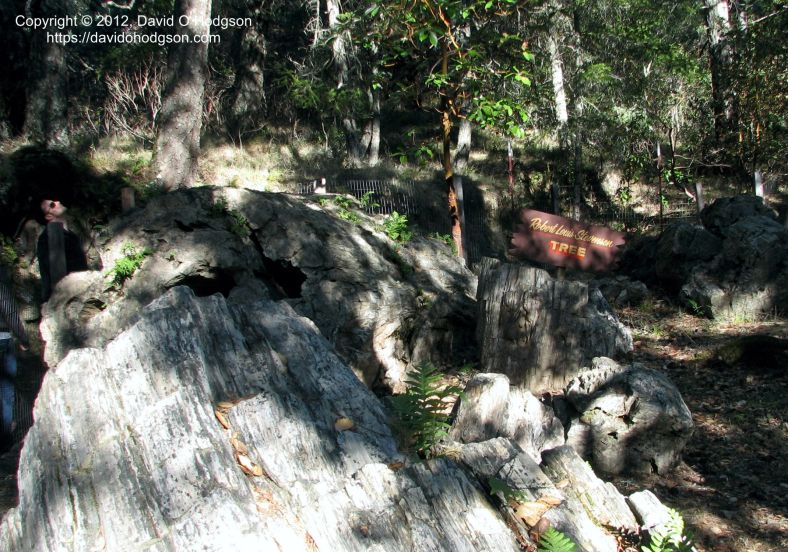 You can take a docent-guided tour around the forest, or else stroll around at your leisure. The tour covers about half a mile, and it’s not particularly difficult, but it’s probably best to avoid taking it during the hottest or wettest weather!

If you’re ever visiting Wine Country, then the Petrified Forest is worth a visit. The site was closed temporarily for cleanup following last year’s fires, but is now open again.