The photo above shows Chelsea Drive, Larkfield, just north of Santa Rosa, as it appeared yesterday. Google Streetview shows how this street looked before the fire.

As I mentioned in a previous post, between 2011-13, we lived in a house in Larkfield. That house just escaped the devastation of the Tubbs Fire, but elsewhere nearby entire neighborhoods have been destroyed. Chelsea Drive, shown above, is a few hundred yards south of the street in which we lived.

During the time that we lived there, our local grocery store was Molsberry Market. There are still a few items that I can get only there, so, yesterday, I visited the area for the first time since the disaster.

Fortunately, Molsberry Market itself, and the shopping center in which it’s situated, seem to have escaped unscathed. Yesterday, the sign below was posted on the store’s front door. 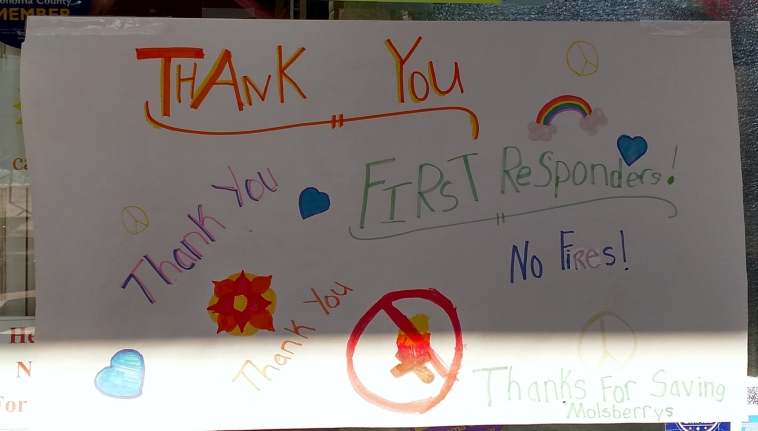 A Thankyou event for First Responders was taking place at the store, and presumably the poster was produced by local schoolchildren. On the bottom right of the poster, it says, “Thanks for Saving Molsberrys”.

The Eastern end of the street immediately north of where we lived, Ramsgate Court, was completely destroyed. The image below shows the view looking East. Our favorite restaurant, Cricklewood, stood on the opposite side of Old Redwood Highway, behind the stop sign in the photo. 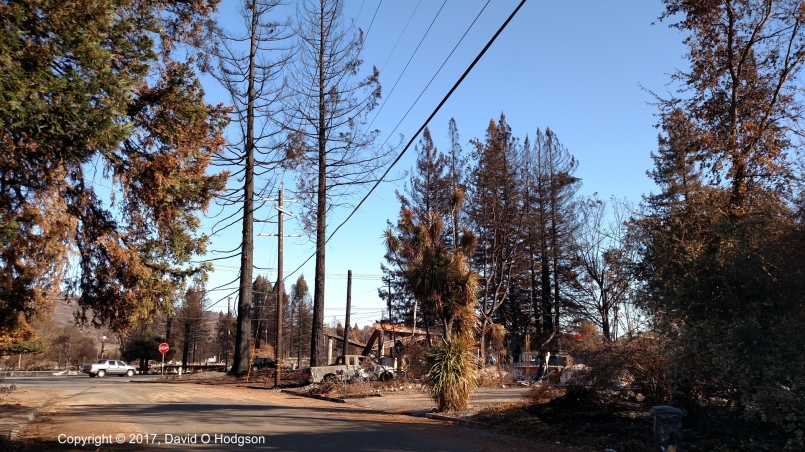 This tragic scene reminded me of some of those old photos we see of World War II battlefields. Although many of the tree trunks survived, I’m not sure how many of the trees are still alive. In some areas, many are already being felled.

From Larkfield, the burned area stretches south all the way down Old Redwood Highway as far as Fountaingrove.

The veterinary hospital that looked after our cats, when we lived in that area, was Northtown Animal Hospital. The sign in front of the building still seems to be in perfect condition…

…but sadly the building itself did not survive, as shown below. 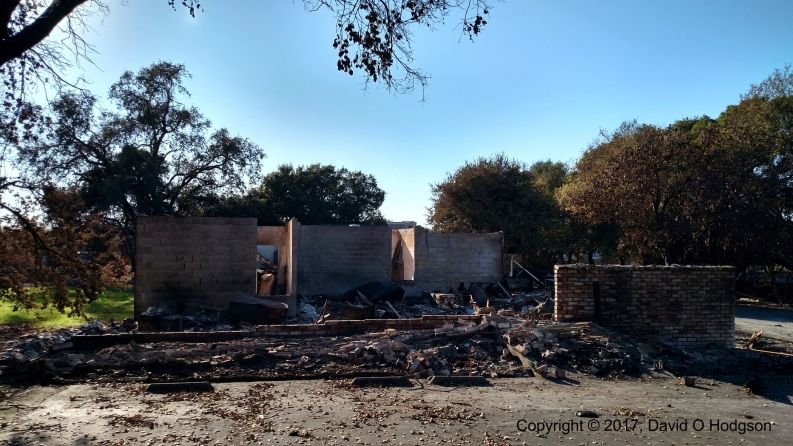 The scene below shows the burned area on the opposite side of Old Redwood Highway from the Northtown Hospital. The cables hanging from the trees are power lines that were downed during the fire. (Fortunately, in our housing development, all cables are “undergrounded”, so we don’t have aerial cables like these.)

There’s no question that it will take a long time to rebuild many of these neighborhoods, and that work is just beginning. Those of us who were lucky enough to escape the devastation can only do what we can to help in the rebuilding process.