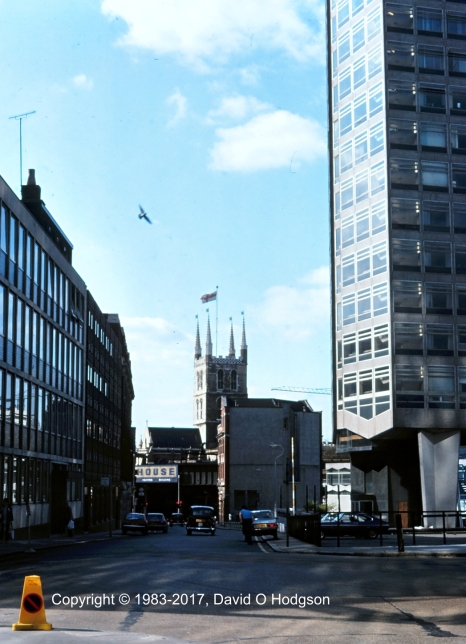 I was very saddened to hear the news yesterday of the latest pointless terror attack in London. Naturally, my best wishes and thoughts go out to all those affected by the incident.

This latest incident reminded me of the ever-present terrorist threat that existed when I lived in London during the 1980s. In those days, almost all the threats (real or hoax) came from the IRA, and there were several actual bombings in London while I was there.

As a result of living in London for a few years, I was forced to think about the delicate balance of opportunities and dangers presented by living in a free society.

In response to the IRA bombings, every building in London that admitted the public adopted a policy of searching the bags of visitors entering the premises. This naturally included the museums near Imperial College on Exhibition Road, such as the Victoria & Albert Museum. Nonetheless, it seemed clear to me that there was really nothing that could be done to prevent all such threats, and that it was inevitable that some attacks would succeed.

I became quite accustomed to the bag searches when going into a building, but, on one occasion, the guard searching my bag admitted that these efforts wouldn’t really deter a serious threat. He said to me, “This is really just to reassure the public. You could put a bomb in a cigarette packet and walk in with it in your pocket, and we’d never spot it.” Sad but true.

While I was a student, I also worked as a Sales Assistant at Selfridges Store in Oxford Street, London. In that job, bomb threats were a daily nuisance, although, while I was there, all of them fortunately turned out to be hoaxes.

The point I want to make here is that, during all the years that I lived in London, I was never personally involved in an actual attack of any kind. The press coverage naturally given to such events makes it seem that they are more widespread than they really are. The attacks of the IRA were a real danger and a constant worry during those years, but they failed in their aims, and they never prevented Londoners from going about their lives.

Unfortunately, it suits the purposes of some politicians to exploit this kind of event to whip up fears and con the public into signing away their own freedoms. We’ve just seen a particularly transparent attempt to do that, with the irrelevant and unhelpful tweeting of Tweedle Don, trying to link the London atrocity in the UK to his unconstitutional travel ban in the US.

Don’t be Intimidated into Surrendering our Freedom!

Given the possibilities for committing terrorist attacks in large conurbations such as London, it’s actually a relief that so few actually succeed. I realize that this is no consolation for those whose lives are affected by these atrocities, but, for the remainder of the population, it’s important not to blow these events out of proportion.

The only way to guarantee that such attacks could not happen would be to implement a surveillance police state, which would entail giving up many of our existing freedoms. However, most of us value our freedom, and wouldn’t want to live in such a state. The price of living in a free society is the risk that a few such horrific events will occur.

Of course, that realization makes it no less shocking when these things do happen.