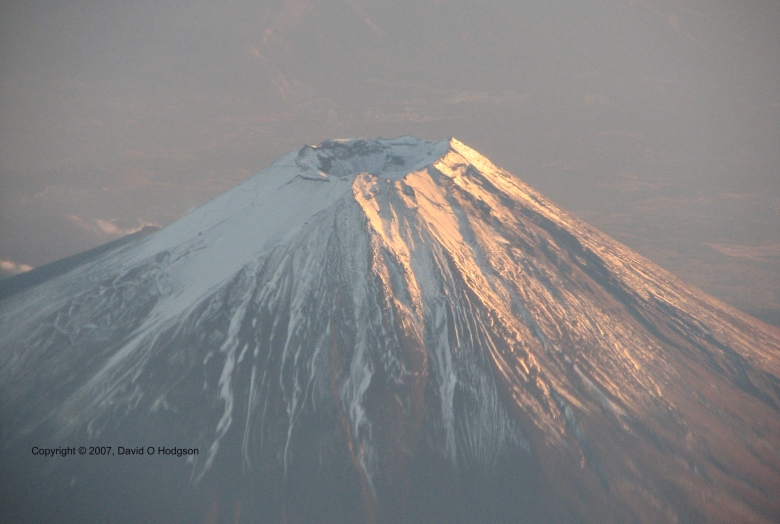 I took this photograph of the sun setting on Mount Fuji as we were flying towards Osaka, in November 2007.

Looking back on my life, there have been several occasions where something happened to me that was simply the result of being “in the right place at the right time”. These occurrences were not the result of any great skill or prescience on my part. This photograph was one such instance.

As a Flight Attendant, my wife Mary typically worked flights to Japan, and occasionally I was able to accompany her on those flights. For me, it was a short vacation to a fascinating place.

Mary elected to work a flight to Osaka over the Thanksgiving holiday in 2007, and I went with her. We spent an enjoyable few days there and avoided all the travel hassles in the USA.

As we were approaching Osaka to land, the sun was setting. I happened to look out of the airplane window, and saw the view in the photograph above. It was hazy, but the low rays of the sun were just breaking through and catching the top of the volcano. I’ve never seen Mount Fuji like that again!

During our stay in Osaka on that occasion, we made a special journey to the grounds of Toji Temple, Kyoto, to visit a flea market. Mary wanted to buy a bead from Japanese beadmaker Akiko Isono, who had a regular stall at the market, and that was exactly what she did.