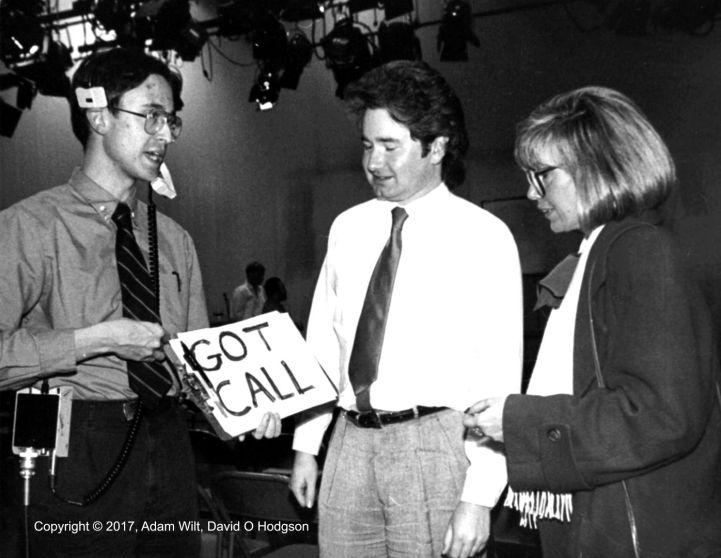 Today (October 3rd) is apparently National Techies’ Day, and, since I’ve contributed in various technical fields for a few decades, I’ll include myself as one of the techies, shown above doing something appropriately “techie”!

The photo was taken during the early 1990s at a meeting of the Society of Motion Picture & Television Engineers (SMPTE). It shows (from left to right): Adam Wilt, me, and my wife Mary.

As I recall, that particular monthly meeting featured a panel of video experts, and was being video broadcast from a studio via a local TV station. During part of the meeting, viewers were encouraged to phone in and ask questions of the panel. Adam and I had volunteered to help run the broadcast.

Adam had assumed the role of Floor Manager, and was responsible for organizing the broadcast crew. My role was to answer the phone and “screen” callers, to try to ensure that only bona fide calls were passed on to the panel. In the photo, I think that Adam is explaining to me how he was going to hold up a sign for the panel moderator to see, to let him know that a call was incoming.

I seem to recall that my screening efforts weren’t entirely successful; at least one “drunk” managed to get past me and talk to the panel! Nonetheless, we had great fun running these meetings, and we certainly got the opportunity to visit some locations that would otherwise have been off-limits to us.

One of our most fascinating meetings was held in Hangar One at NASA’s Moffett Field, and we were given a complete tour of the hangar. That hangar was built during the 1930s to house the huge US Navy airship USS Macon. Sadly, though, I have no photos of that occasion.