In an earlier post, I described some thought-provoking comments about the Monty Python movie “The Life of Brian” that Michael Palin made to me during my student TV video interview with him, back in 1983.

Recently, I’ve been reformatting an ancient video recording of that interview. The entire interview is over 30 minutes in length, and some of it has become quite outdated. Nonetheless, there are some sections that could still be relevant.

For this post, I decided to edit together some of the clips that did not make it into the interview. These were “out-takes”, in which something went wrong (intentionally or otherwise!) during the shot. I can’t honestly say that these have never before been broadcast, because most of them were actually included in the Student TV’s annual “bloopers” program that was screened just before Christmas. Anyway, they’re still quite funny, after all this time.

The content of the clips probably speaks for itself, but I should perhaps explain why the shots appear the way that they do. The interview was an “outside broadcast” for us, so we took along only one camera (because in those days when camcorders were new technology, we had only one portable camera). Therefore, to shoot the main interview, we locked off the camera pointing at Michael, and recorded the entire session like that. That’s why, in most of the video, you can only see him, and hear me talking to him in the background.

Once the main interview had been recorded, we moved the camera to an over-the-shoulder shot of the two of us, then recorded some video of that for cutaways, which would be edited into the main tape.

Finally, after Michael left, we moved the camera to point at me, and recorded all my questions and reactions again, with me facing an empty chair.

I must apologize again for the poor video quality, due to the number of format conversions that this recording has undergone over the years. It’s worse in this case because some of the video was recorded during setup, so the camera is shaking around and there are even color bars over some of it. Nonetheless, I think it’s still sufficiently funny to be worth viewing.

The photo below is the best-quality shot that I have remaining from that occasion, because it’s a professional publicity shot of Michael Palin. 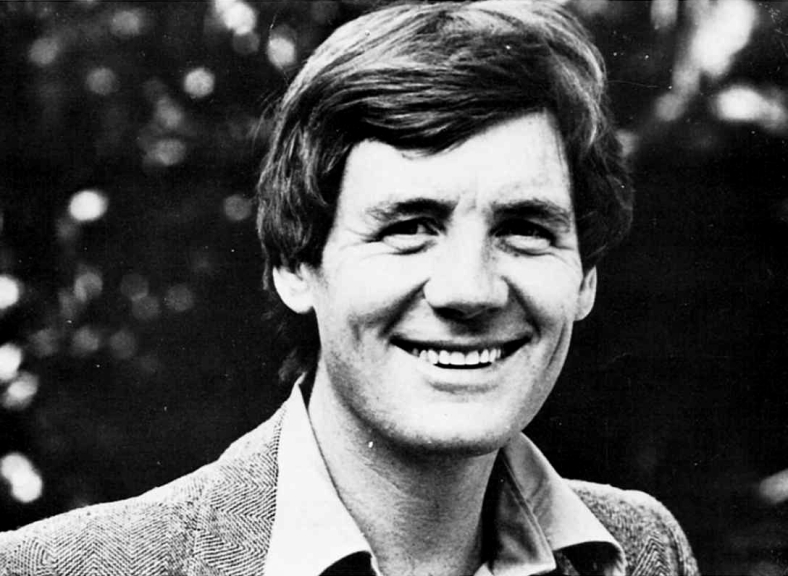 In 1983, while a student at Imperial College, I taped a video interview with Michael Palin, of “Monty Python” fame. At that time, the Monty Python team’s most famous—if not notorious—movie to date had been “The Life of Brian”, which had been released in 1979. Controversial at the time, the movie is perhaps even more famous now, having regularly been cited as the “greatest comedy film of all time”. If you can remember back to that time, you may recall that “The Life of Brian” was vociferously denounced in some quarters as being “blasphemous”.

As our interview progressed, I broached the topic by mentioning to Michael* that there had been controversy about the movie “where I was living”. His immediate response was, “You’re not from Harrogate, are you?” I laughed, but had to admit that I was in fact from nearby Scarborough (both towns being in North Yorkshire, England). He replied along the lines of, “Well, Harrogate seemed to be the worst when it came to the intellectual level of debate”.

Michael acknowledged that the team had anticipated some controversy when planning the movie: “We realized that some people would claim that Brian was supposed to be Jesus, so we deliberately included Jesus alongside Brian, to make it clear that he wasn’t.”

As it turned out, the reality was that all too many were willing to denounce the movie without even having seen it. In fact, as is surely obvious to anyone who takes the trouble to watch it through, the plot pokes satirical fun at religions, organizations, and many other topics that you’d expect the Monty Python team to address. The petulant reaction simply provided extra publicity for the movie, and discredited those who complained about non-existent offences.

Perhaps among the most insightful aspects of the movie is the lampooning of the way in which, having committed themselves to a particular belief, some people will go to extremes to avoid having to accept any evidence that the belief is wrong. Instead of reaching the logical conclusion, believers go out of their way to create and justify the most implausible rationalizations, redefining words and concepts as necessary to avoid admitting error.

I found Michael Palin’s comments during our interview interesting and personally thought-provoking, since he was correct that there had been much sanctimonious hand-wringing about the movie in my home town (and in many other places too). The end result of all that, in my case, was to make me realize that even some supposedly-intelligent people whom I knew couldn’t necessarily be trusted to behave rationally when it came to the “big issues”. That was a lesson that I’ve carried with me ever since.

(* Just in case it seems presumptuous of me to refer to my guest simply as “Michael”, I should mention that he gave me explicit permission to do that! He told me, “Only my parents call me Mr. Palin”…)